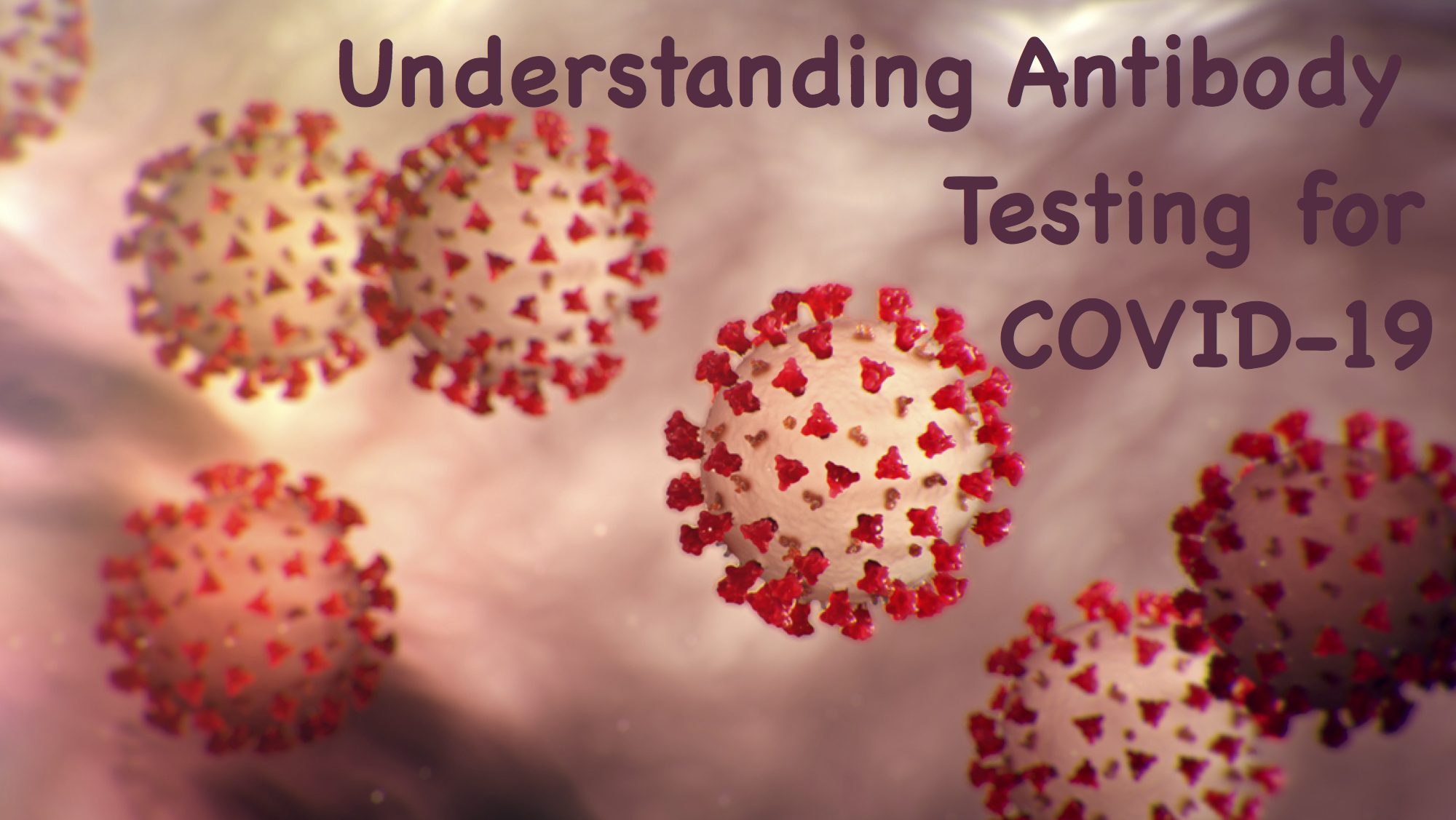 Over the past week, patients, friends & staff have asked me to explain the serum (blood) antibody tests that have been advertised recently to detect evidence of COVID-19 infection. As a medical provider, the immune system has always been a challenging subject to understand, much less communicate to a non-medical person. I will do my best to explain in layman terms what I know about the immune system.

Mounting an antibody response is crucial for everyone to overcome an infectious pathogen. The immunity that can result is crucial not only for that individual but also for entire communities and populations. Determining who has immunity to COVID-19 is going to be crucial as we come out from under this pandemic. The main question people want to answer is that if someone is truly immune to re-infection (and if the infectious agent isn’t mutating excessively) then should that person be able to leave their home, go to work, and live life ‘normally’.

The innate immune system relies on general signals that tell the body something foreign is in its midst – such as a viral invader like COVID-19. Over the years, viruses have evolved to disrupt these recognition signals and their downstream events. A major player in the innate immune system is the major histocompatibility complex (MHC), which helps the body recognize ‘self’ versus ‘non-self”’ and is the basis for things like transplant rejection. The innate immune system also has NK (natural killer) cells, which are immune mediators that patrol for cells that differ in composition from our ‘self’ and destroy these invaders. These are both valuable immune components, but there are many situations where they aren’t enough. The main reason is that because the innate immune pathways have been around for a long time, pathogens have had more time to undergo selection for strains that have found ways to evade or interfere with these mechanisms.

The adaptive immune system (AIS) is a newer immune system. The AIS builds on the innate immune system and adds some extraordinary power and specificity. Understanding the AIS helps us answer the big questions when it comes to our immunity: (1) how does the body recognize such a wide variety of pathogens; (2) how is the body able to mount a response; and (3) how does our body maintain memory of such infections. The key to the success of our immune system is that everyone carries, at all times, a gigantic library of specialized proteins whose function is to hang around until something foreign shows up – so that one or more of them can bind to and attack that foreign invader. These proteins are called antibodies. They are carried around on the surface of cells, called B cells, and every human being has a different collection of them. A foreign substance that binds to one of those antibodies is called an antigen. An antigen can be viewed, for all practical purposes, as a foreign invader. Only a few B cells respond at first to a new antigen (foreign invader). But this initial response sets off another part of the immune process. When an antigen binds to the antibody on the surface of a B cell, the antibody-antigen complex gets taken up into the B cell. The antigen is chopped up within the B cell and sent back to the surface of the B cell — now called a ‘primed B cell’. This primed B cell with its ’chopped up’ antigen divides rapidly, which produces large numbers of copies of the antibody, which are then released into the bloodstream. Some of these cells hang are around and become memory cells.

So, here we have the answers to the questions above. The body is able to recognize so many antigens because we constantly carry around a ridiculously huge variety of antibodies on our B-cells. And we ‘ramp up’ this response when those primed B cells multiply and produce huge numbers of antibodies. And finally, some of those cells are specifically designated to stay behind, surviving for decades, as a repository just in case that particular pathogen should show up again.

I am leaving out ridiculous amounts of immunology. But these are the basics you need to know with regard to understanding the antibody-based blood tests that many companies are working on and presenting to the FDA for approval.

Serum antibody tests can be pictures as being similar in concept to an over-the-counter urine pregnancy test — an antibody recognizes a component of the pregnancy hormone and lights up as a colored line (or plus sign or whatever lights up on the particular test you purchased) on the test strip. For determining whether or not a person has developed antibodies against COVID-19, a typical test does the following. First, drops of blood from a patient’s blood sample are absorbed onto a sample pad. Once the blood absorbs, it encounters a zone that contains known COVID-19 antigens (these are proteins found specifically on COVID-19 virus). If the blood sample has antibodies to the COVID-19 proteins, the antibodies will bind to the COVID test antigens and the bound-complex gets carried along the strip. The sample then runs into three zones on the sample pad. Each zone is impregnated with different antibodies to those original antibodies. These are essentially two antibody subclasses, IgG and IgM. The IgM antibodies are the first to get produced in an immune response. They are relatively short-lived, with a half-life of five or six days. These are the body’s immediate response antibodies. So detection of IgM against COVID-19 antigens indicates a recent (or still active) infection. The IgG antibodies are more numerous in number but take time to build up in our body. For many infections (measles, chickenpox, mumps, hepatitis B and more) these IgG antibodies indicate that a person is now immune to re-infection. So on that test strip, the antigen-antibody complex will encounter a band of anti-IgM antibodies, bound to the paper, and then a band of anti-IgG antibodies, and finally a band of control antibodies that react with human antibodies in general. When the patient’s blood hits one of those antibody-to-antibodies zones, the blood will come to a halt and light up the test strip (just like that over-the counter urine pregnancy test). Ultimately, the test strip should always show a colored line for the control. It can also show colored lines for either IgG or IgM, both, or neither. Of note, if there is no colored line on the control strip then something has gone wrong and the test needs to be discarded and run again with a fresh kit.

This method of testing is able to tell us that if a person is positive for IgM only then they are likely actively infected. If they show only IgG, they may well have gone through an infection and could be immune. Showing both suggests you are likely on the back end of an infection. And showing neither (with a valid control line) means that you haven’t been exposed to the virus at all.

But unfortunately its not that simple — there can be complications and exceptions. It should be mentioned that if a person was infected with SARS a few years ago (or some other virus that has similar protein structure to COVID-19) they COULD show positive IgG in this type of test. Also, another complicating factor is that a negative result really doesn’t mean much, because there’s always the chance that a person generated antibodies that don’t recognize the antigens that the test kit has built into it for detection. You can’t rule it out. It is also quite possible that a person has been infected but hasn’t had time to generate enough antibodies for the test to detect yet. All such kits will include a warning that negative result can’t be used to say that a person isn’t/hasn’t been infected. And they’ll also include a warning that such a kit can’t be used as the last word even if they come out positive, although to be sure it is a pretty strong indicator.

A big question is whether this COVID-19 infection will provide lasting immunity: is a person who shows IgG against COVID-19 antigens safe to go out without fear of re-infection? We don’t quite know the answer to that question yet. The record with past coronavirus pathogens is mixed. We are going to know eventually but we need more data at this time. We also don’t know how long such immunity will last, obviously. Months? Years? An example is that many vaccinated people my age are still immune to rubella but not to measles.

So that’s antibody testing in a nutshell. There are several companies that have developed point-of-care tests as described above and have FDA allowances (not full approval yet). They can definitely be useful — but much is still not known about the serology and the long-term immune response with regard to COVID-19.